The Party Has Moved

I've moved my blog to my own domain. Just click here and join the party.

I'm posting a new sock pattern on my new site this week. The first "step" has already been posted. So head on over and join the fun.
Link
Who's linking here?
|

My new site is ready for visitors!

Click here to see my new home and find out who won the soap contest.
Link
Who's linking here?
|

Milestone And A Contest

Someone mentioned to me the other day that subscriptions to my blog's feed on Bloglines recently reached 1,000. I checked and, sure enough, it's true. Yikes.

I figured I'd better hold a contest to commemorate the occasion before too many of you unsubscribe and I dip below 1,000. 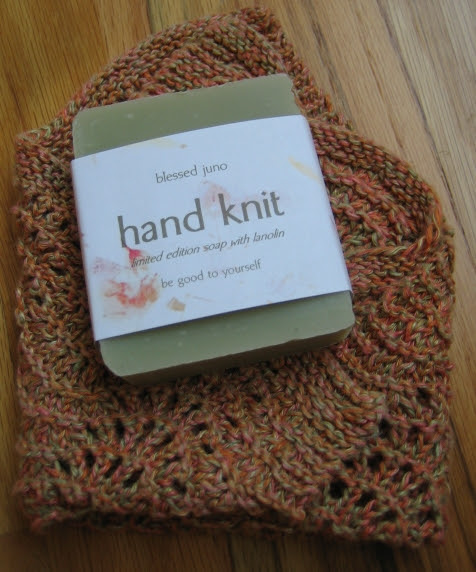 It's a bar of Blessed Juno handmade soap in the "Hand Knit" special edition and a color-coordinated warshcloth knit from Euroflax linen.

Next, the particulars of the contest:

I recently purchased a domain name and hosting services and have been busily preparing to move my blog to its new home. But I could use some help. Here's where you come in.

Leave a comment to this post before next Wednesday with a suggestion on how I could improve the substantive content of my blog, or tell me what you like or dislike about the appearance of the current blog so I can decide how to format the new site.

That's it; not hard at all.

So, go forth and comment and possibly win a really great bar of soap.
Link
Who's linking here?
|

When I learned last year that Marcia was setting up a Holiday Headstart group, I joined immediately. The basic premise of the group is that you knit at least one holiday gift each month so you avoid last-minute frenzied knitting.

Don't get me wrong, I'm a bit of a planner and I typically have all my holiday gifts knit by the end of the summer. But my daughter . . . well, she's not quite so far-sighted. Each year I swear I won't succumb to her last-minute pleas for hand-knit gifts for her friends, but when actually faced with the alternative--i.e., a trip to the dreaded mall--I usually give in and whip out a scarf or a hat.

So I viewed Marcia's group as an incentive to stock up on teenage-friendly gifts. Yah, I know, teenage girls are fickle and I run the risk my daughter will reject things in December that she approves in May. No matter. Anything she doesn't want next winter can be donated to a shelter or Dulaan.

Surprisingly, however, my first Holiday Headstart project is neither a scarf nor a present for my daughter's friends. It's a hat for my neighbor. 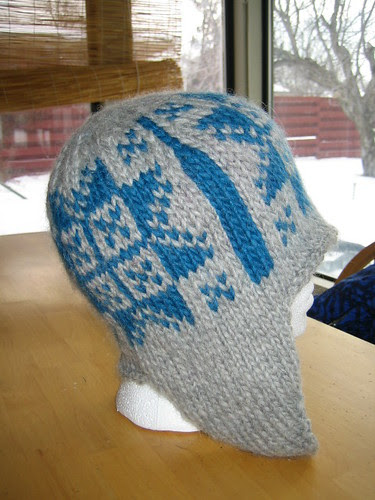 I used this hat design as a guide and a chart from Nanette's excellent booklet for the stranded motif.

My neighbor's wife died last year. Although she was quite possibly the best knitter I ever knew, I swallowed my pride each December and knit something for both her and her husband. She loved felted items and he was usually on the receiving end of a hat or mittens. He’s a very fit octogenarian who walks every day regardless of the weather. Even last week, when the day-time temperatures here barely rose above the single digits, I saw him pounding the pavement early in the morning on my way to work. One day I saw him wearing a hat I gave him a few years ago knit from this pattern. The recent frigid temperatures convinced me it was about time to knit him a new hat--one with even longer ear flaps. 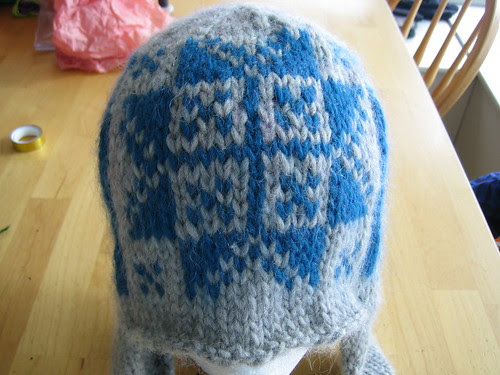 My neighbor is Norwegian, so I thought he'd appreciate the Norwegian star. I had to fudge a little to work the decreases into the pattern but I'm pretty pleased with the finished hat.

It was a fun, fast project; I completed it in just one night and part of the next morning. You gotta love those size 6.5mm needles.

Or not.
Link
Who's linking here?
|

A nasty funk has settled into the Salt Lake Valley and, dude, I'm sick of it.

Basically, the weather conditions have been perfect for creating a craptastic inversion that has lingered for more than a week. Essentially, cold air and pollution are trapped in the valley, with the warm air above. So if you can escape to a higher altitude, it's actually sunny and warmer than it is in the valley.

Thankfully, there was a small snow storm last night which pushed some of the yucky air away and this morning I woke to see actual, real, live sunshine at my house which is at a higher elevation than most of the valley. But a quick peek out the window revealed that the lower part of the valley is still covered in a layer of gunk. I'm enjoying my sunshine while I can.

Update: Click here for a nice, big photo of what I'm talking about. See the layer of grey crap trapped below my sunny, blue sky. You can barely make out the buildings downtown.

The dreary days had left me with little motivation. Although I did finish the samples for Amy and I mailed them off yesterday: 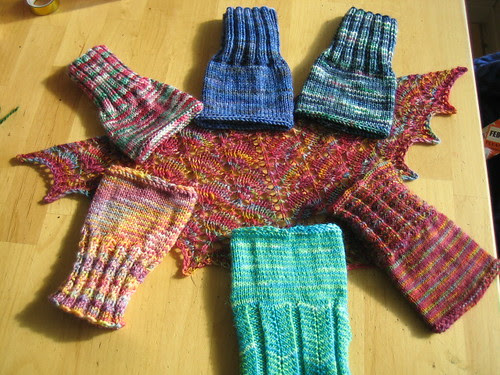 I also finished my January project for the Holiday Headstart Project but I don't have photos yet. Later this week.

To shake some of the funk, I met up with Teri and Anne yesterday at Three Wishes, a fantastic fiber arts store located miles, and miles, and miles from me in a part of the valley I view as a foreign land. Okay, so maybe it's only ten miles away, but it feels like 100. 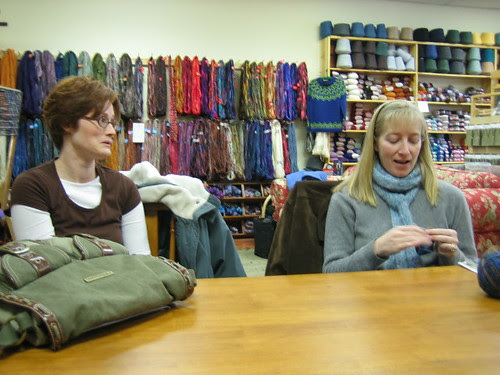 I received some of Anne's Vermont Maples roving in a swap and started spinning it up when I got home. 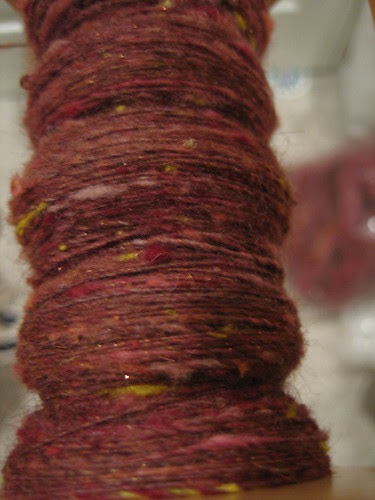 It's amazingly soft and a riot to spin. Added to a little sunshine, and I'm right out of the funk.

Several people wrote and asked me about the swatches I'm knitting for Amy. The question I got most was about the name of the colorway in the last swatch. Amy tells me the colorway is called "Leaf Peep" and she'll be dyeing more shortly.

I finished that last swatch on Monday and then used the rest of the skein to knit a mini Forest Canopy Shawl (nail polish bottle included for scale). 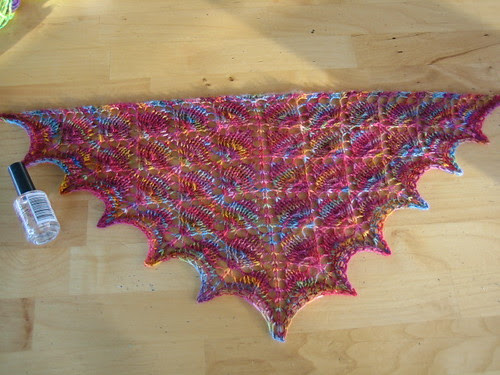 It might make a cute kerchief for a little girl. Or, am I up in the night.

On Saturday, I got a wild hair and organized a section of my stash room. Don't worry, no UFOs were harmed in the process. This is one of the few times I couldn't bring myself to frog incomplete projects. But I did put each project in its own bag so they'll be easier to pick up and work on if the mood strikes.

Of course, the down side to cleaning up is that I found some long-forgotten yarn and cast on for a bottom-up sweater. 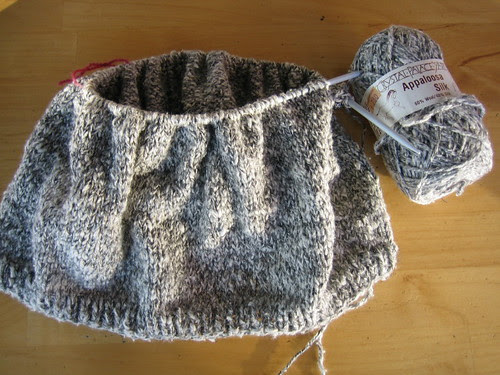 Anyone remember this yarn?? Probably not, since most of you probably weren't born when it was manufactured. 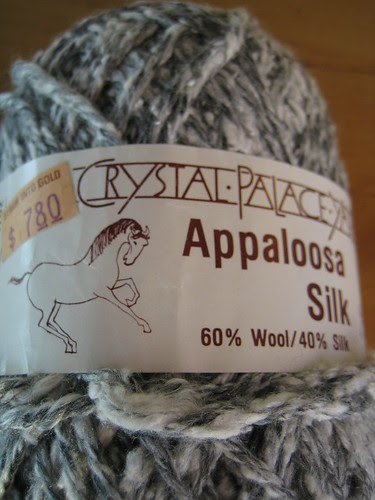 It is, however, wonderfully soft and easy to knit. With any luck, I'll have a cozy, warm sweater just in time for spring.

I also bit the bullet on two skeins of sock yarn and posted them for sale on the DeStash blog. 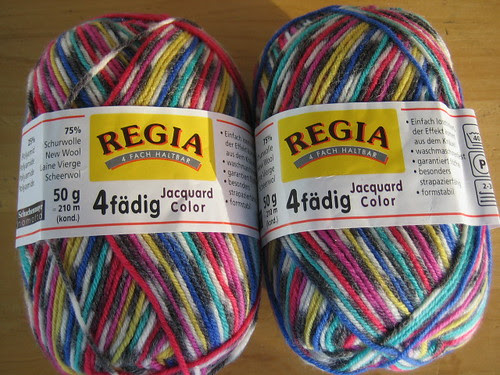 I feel a little better now that I'm destashing this sock yarn.
With these two gone, I only have 497 skeins of sock yarn left to sort through.
Link
Who's linking here?
|

Running commentary on my unending quest to knit up my stash.